Martial Arts - Deciding on the best form for your child 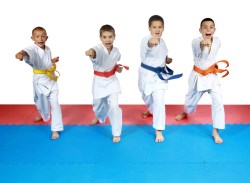 Choosing a form of Martial Arts for your child can be a tricky decision. To most, it may seem that there is little difference between the various martial arts. However, this is not the case and you may find that one form will be much better suited to your child. Here we offer a brief description of some of the most popular martial arts that are practiced today.

Taekwondo is the Korean art of self defense, and is the most widely practiced martial art in the world. At two thousand years old, it is one of the oldest forms of self defence. Taekwondo places special emphasis on kicking and fast hand techniques while training also involves varying forms of takedowns, joint locks and throws. Taekwondo promotes both mental and physical discipline. The breaking of wooden board, bricks or tiles is common, requiring both physical skill and mental concentration.

Kids taking taekwondo will learn pre-arranged sequences of techniques known as forms as well as relaxation and breathing control exercises. Examinations allow kids to progress on to higher ranks, giving them something to strive for.

Taekwondo competitions typically involve sparring, with varying degrees of contact from light to full contact. Kids will usually learn a small bit of the Korean language as it is used to give commands.

Karate was originally developed in Okinawa, Japan. Unlike taekwondo, it tends to focus more on hand strikes rather than kicking. In some styles of karate, grappling, throws, joint locks and restraints are taught.

Karate can be practiced as an art, a sport, a combat sport, or as self defence training. Traditional karate (art) places an emphasis on self development while sport karate places emphasis on exercise 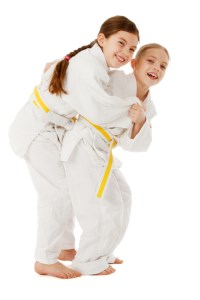 and competition.Karate is commonly divided into kihon; the basics and fundamentals, kata; the formalised sequence of movements, and kumite; sparring. The level of contact varies considerable from light to full contact during sparring.

Like Taekwondo, karate also follows a grades/ranking system, allowing kids to progress through their training.

Judo is a relatively modern Japanese martial art and is practiced in almost every country around the world. Judo is often described as a ‘soft’ martial art, with the goal being to throw one’s opponent to the ground and immobilise them with a grappling maneuver, choke, joint lock or strangle hold.

Judo involves both ‘kata’ and ‘randori’.

Kata is a system of prearranged movements that teach the fundamentals of attack and defense. Hitting, kicking, stabbing and slashing with the use of weapons are all allowed during Kata. The reason for this is that movements are prearranged, and therefore each partner is better able to determine what their opponent will do next, reducing the risk of injury.

Randori is free practice in which partners pair off. Kicking, hitting and the use of weapons are never allowed during competition or free practice.

Kung Fu is the word used to describe Chinese martial arts and is made up of a number of fighting styles that have developed over time in China. Some styles are inspired by chinese philosophies, religions and legends while others include physical exercises that mimic animal movements. Internal styles focus on the harnessing of ‘qi’ which is described as an inner energy or life source, while external styles focus on improving muscle and cardiovascular fitness.

Chinese martial arts training consists of basic skills. forms, applications and weapons training. Each style places varying emphasis on each of these components. Kung Fu involves a basic theory around weapons training, which considers the weapon as an extension of the body. 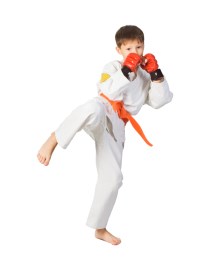 Aikido is a Japanese martial art performed by flowing with the motion of an attacker rather than opposing it directly. The idea is not to defeat or injure one’s opponent, but to remove the idea of aggression from the attackers mind by performing in such a way that he/she only hurts themselves.

Circular movements are taken rather than linear ones, as an effort is made to move out of line of the attacker. No attempt is made to block an opponent's blows.

Aikido requires much less physical strength as entering and turning motions are used, followed by various throws or joint locks in order to direct the attackers momentum elsewhere.

Why Self Defence classes can be good for your child