In, or out, this summer? 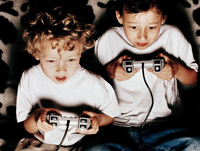 There aren’t many certainties in life, but surely one of the more reliable things has to be the un-reliability of the summer weather (sigh).

By the time the schools break up next week, we’ll already have had one of the summer months (I’m counting the months of June, July and August as the ‘summer’ for the purposes of this point – although others I talk to would argue that July, August and September are the summer months. Anyway, I digress and that’s another post altogether).

So, as we inevitably head into a summer of weather hokey-kokey, the issue of indoor games comes to the fore. And for many homes, indoor time means screen time: time spent on games consoles, the Wii, Kinect or computer - and I wonder whether this is a problem?

How much computer game time is acceptable and appropriate over the long summer holidays? And can it possibly threaten to spoil any warm sunny days we do get (I’m being hopeful) as we attempt to prise the consoles out of our children’s hands and get them outside?. How many children simply aren’t interested in kicking a ball around the park, or going out on the bike because they would prefer to kick a ‘virtual’ football around on the Wii or drive Mario’s racing car.

It's certainly something that worries me and will no doubt continue to worry me more as my children get older and computer games increasingly more prevalent in the homes of their friends.

What do you think? Are computer games an unavoidable fact of life now and a life-saver when it’s pouring outside, or are you dreading a summer of arguments about switching things off and going outdoors?