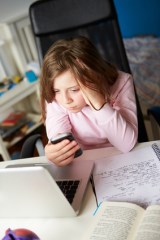 The phenomenon of bullying by abusive text messages presents a particular difficulty for parents. Young people are unable to identify the sender (the bully conceals their identity by switching their mobiles into Private Number mode, allowing the abuser to remain anonymous). This allows them to say things that they would never say to a person’s face and to send messages at any time and any place. For this reason a victim of this type of bullying is particularly distressed because they cannot escape the bullying and may even be receiving offensive messages during the night.

Because teenagers use their mobile phones as one of the main methods of communication with their peers, it is unrealistic to remove the mobile phones from them. It is important to tell them that they must get help if they are being bullied in this way. Advise your teenager to be very careful about disclosing their phone number. Keep all abusive messages in the phone memory and keep a log of messages. If necessary, change the number and give it only to close family and friends. Young people should be advised to resist the temptation to return offensive messages. If the problem is serious enough it may be a matter for the police.

While mobile phone companies are not the moral guardians of phone users, they will cooperate with the police in tracing blocked mobile numbers used in bullying cases. In Ireland it is an offence in law to send malicious or threatening text messages, covered by the 1999 amendment to the post Office Act, 1951. If your son/ daughter is receiving threatening or malicious text messages, you should report it to the police.

What to tell children if they are being bullied
Approaching the School
Concern about a Teacher Bullying
Stop the bullying before it starts
Types of bullying
Is your teenager bullying others - what can you do?
Effects of Bullying
What if the School doesn't respond