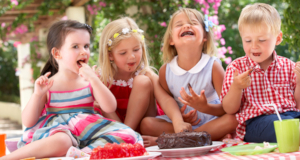 These are some great party games for your kids and their friends to enjoy at any party. These fun games are sure to be a hit no matter the size of the party or the occasion, and, most importantly, can help tire the kids out! Firstly we can take a look at some simple and quick games, and further into the article we list some more interesting and long lasting party games.

Be the last not to let your balloon get burst! Divide the group into two teams, and tie the balloons to everyone's ankles. Say "go" and watch the teams trying to burst the other team's balloons first. The team with the last balloon wins.

Divide children into two or more teams. Each team stands in a line and passes a balloon down the line, taking it in turns to go either between the legs or over the heads of the players. When it reaches the last child he/she runs around to the front and starts it off again.

The game continues until the team leader ends up back at the front and the first team to finish is the winner.

A treasure hunt activity. Hide some small prize or sweets in the party room (or better still if the weather is good, hide them in the garden)before the children arrive. Tell them when they are hot or cold. Whoever finds it keeps the prize.

Hang hula hoops from the ceiling by ropes and have players throw small footballs or frisbees through the hula hoops. You can mark off throwing levels or lines on the floor for various ages. For the older participants you can even have the hula hoop swing back and forth as a moving target.

The parcel is a main prize wrapped in several layers of paper. The children sit on the floor and pass the parcel around while music is being played. Once the music stops, the child who is holding the parcel may remove one layer of paper. The game continues until the last layer is removed revealing the prize. 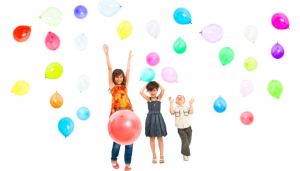 Teams Race to see how many balloons they can get in their bags before the music stops. You need a large area and lots of balloons (different colors for each team, e.g. four teams, four colours). You also need four large plastic bags and fun party music. Put the four teams in four corners with their plastic bag and balloons in the middle, jumbled up.

Divide everyone up into teams and decide who from each team will be the bag holder (so everyone gets a turn in the fun, alternate bag holders each round). After that, assign each team a color balloon. Now, make up a funny way to get the balloons into the bag, for example, "You have to bounce the balloon onto your head until you get to the bag."

Then, start the music. Everyone will run to the center (except the bag holder) and pick up one of their team's color balloon and do the silly action until they get to their team's corner. The bag holder puts it in the bag. If a kid drops a balloon and it touches the ground, they have to go to the middle and start over. After a few songs (two or three is easiest), stop the music and tell the bag holder for each team to count how many balloons are in the bag. The team that has the most balloons, wins. 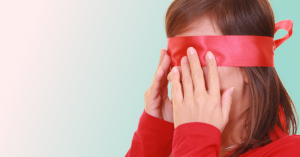 A Piñata is made of papier-mâché to form the shape of popular and traditional characters depending on your party's theme and is then filled with sweets and small toys. The idea is that an adult hangs the piñata by a rope from a tree branch, clothes line or other suitable point and each player takes it in turns while blindfolded to hit the piñata with a stick until it breaks open – ensure there is adult supervision at all times.

As soon as it is broken all the goodies fall out for everyone to share. To avoid young children being disappointed, it would be a good idea to put small goody bags inside with each child's name on it. You can either have a go at making your own Pinata or buy one - check out our list of Party Suppliers many of whom stock Pinatas.