The unexpected outcome of Lent 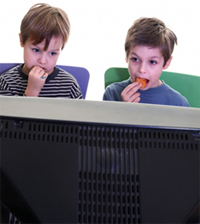 So, we reached a decision a few weeks ago. Daddy would give up chocolate, mummy would give up wine and the children would give up watching cartoons. I didn’t give any of us much hope of lasting more than a week, but as we head towards the home stretch, I have to say we have done remarkably well. Especially the children.

The concept of giving something up for several weeks was one they didn’t really grasp, so perhaps their enthusiastic compliance in the ‘no cartoons’ agreement was slightly naïve. Suffice to say that on Day 2 the youngest (4) suggested that he might decide to give up sweets instead of cartoons and could he watch some cartoons now?!

But, we’ve persevered. Where the TV would usually be switched on pretty much automatically after dinner, it has only been on occasionally over the last few weeks. Instead of the habitual request for ‘Cartoons?’ from the eldest (6), pretty much as soon as he has put down his knife and fork, there have been no such requests for weeks now. Combined with the lighter evenings, it is now a case of grabbing a football and going for a kick around outside. Cartoons, it would seem, have been almost forgotten.

We haven’t banned TV entirely. They have watched the occasional nature documentary, but the Ben 10, Scooby Doo, Pink Panther and Spongebob habit appears to have been kicked.

With so many reports about the longer-term impact of children watching too much TV, I’m delighted that, what started out as almost a joke to see if the children could possibly survive without their daily fix, has turned out to be a bit of a lifestyle changer. Perhaps we don't give our children enough credit when it comes to breaking habits. Perhaps, with a little bit of perseverance, we really can adjust those unplanned parenting traps we have fallen into. Perhaps a change really is as good as a rest.