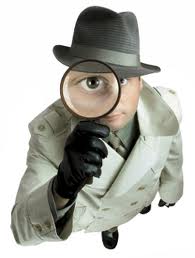 For years now, I’ve been warning my kids about ‘The Man’. You know, the one who watches them and will come and arrest them (or something like that) if they throw food in restaurants or climb up, instead of down, the slide in the playground. ‘The Man is watching,’ I whisper, pointing to a Security Guard or someone similarly officially-attired. ‘I’d behave myself, if I were you, or he’ll be coming over to have words.’
The threat of ‘The Man’ generally works. I have also used the ‘eyes in the back of my head’ trick which always seems to impress.

However, a recent report in The Independent, suggests that an extra pair of eyes, or ‘The Man’ may not just be a thing of parents’ imaginations anymore, as it is reported that spy-technology is being used by the more tech-savvy parents to keep an eye on their children, remotely.
The report comments that CIA style ‘spy’ devices are being slipped into schoolbags, ‘Teddy cams’ can be used to keep an eye on the child-minder and GPS style tracking devices can even be used to monitor the child’s journey home from school. For some parents, this is simply about having peace of mind when their children start to ask for a greater degree of independence. ‘I use it with my six-year-old Aaron, for peace of mind, not as Big Brother,’ comments one parent. ‘It helps us to relax. If he goes over the wall at the end of the road it will send a message to my phone and I can track where he is on my laptop or phone. I have my phone set up to a loud siren. ‘

For others, it is simply about retaining control with applications available for tracking teen drivers. ‘It protects the car and you can track the speed. On Saturday night when the son or daughter is gone off with the car, all the speeds are tracked. So on a Sunday you can sit down and go through exactly where they've been and what speed they were driving at.’
Sound far-fetched? Perhaps – but this is not just the stuff of Hollywood’s imaginings: this is really happening.