Posted by SchoolDays Newshound, on 09/11/2016. Tags: Parenting Teachers
The exam support scheme, known as RACE (Reasonable Accommodations at Certificate Examinations) has caused a lot of controversy and been the source of a lot of stress for students and their parents in recent years. It was particularly problematic because students who received support at Junior Cert level weren’t automatically assured of the same support for the Leaving Certificate Examination.

The majority of applications for the RACE scheme come from students with dyslexia while the remainder are from children with dyspraxia, autism-spectrum disorders, attention deficit hyperactivity disorder, visual or hearing impairments, other disabilities, or broken limbs or illnesses close to the exam. Under the scheme, qualifying students might receive readers, scribers, spelling and grammar waivers, word processors, recording devices, rest breaks or other arrangements.

In recent years there has been growing concern from disability support organisations and parents about the lack of transparency in the scheme and the fact that some students were only given final decisions weeks or even days before the exams started. The Ombudsman for Children received numerous complaints about the scheme in recent years.

The good news is that reforms being introduced by the State Examinations Commission to the RACE scheme for 2017 will give students with special needs greater certainty about their eligibility for support when sitting the exams.

KEY CHANGES TO THE 2017 RACE SCHEME – Extract for SEC Document

Following a review of the existing scheme by the SEC, two significant changes are being introduced for the 2017 examinations and until further notice. The changes have been discussed with stakeholders, including those in the education community and those who represent young people with disabilities and other special educational needs. These changes are designed to provide a better service to schools, parents, and ultimately, to candidates with physical, learning and other special needs who may require supports in order to enable them to access the Leaving and Junior Certificate examinations.

Unless some exceptional circumstance arises, the SEC will accept all such reactivation recommendations. This new model of decision making will give certainty from an earlier stage of students’ postprimary education as to the supports that they will have in the state examinations should they continue to be needed.

Where testing is required as evidence of eligibility, at Junior Certificate or in the case of an application for new accommodations at Leaving Certificate, the testing arrangements are the same as before. So the need for a reader, for example, will continue to be evidenced by reference to the candidate’s attainment in a standardised reading test and error rates in reading examination papers.

Other key features of the RACE scheme for this year can be viewed here.
You can view the full SEC RACE guidelines for schools and students by clicking on the images below. 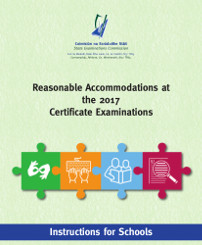 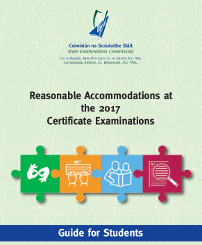