Teen Slang - Trying to Decipher the Foreign Language of your Teen. 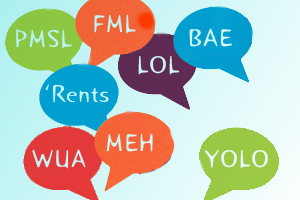 For most parents, attempting to connect with your teen is an uphill battle that is only getting steeper. With social media websites and messaging apps completely dominating your teens life, it comes as no great surprise that there is a communication break down on a very basic level between parents and their tech- savvy teens.

Along with the advances in technology over the last decade, the language of today's youth has evolved into, what we have dubbed, the 'Facebook Vernacular'. This is a language which many parents are not familiar with and it is snow-balling from a simple communication problem to a pop-cultural barrier between the generations.

We here at Schooldays.ie have decided to provide you with a brief cultural guide and a glossary of 'trend-words' (so that you don't lose touch completely with your teen!). We have also included the translation for different emojis. Though it seems silly, teens are becoming more and more dependent on these little faces to express themselves instead of using actual words. They're teenagers, they'll grow out of it (hopefully!).

Have you ever texted your teen and received a nonsensical jumble of letters in response? Teenagers love taking the lazy route and texting is no exception! These random letters are mostly abbreviations.

In My Honest Opinion

What Are You Up To?

ROlling On the Floor Laughing

An expression of Apathy

Slang is a living language which can be found at the core of every youth culture. Although some slang may be carried forward from generation to generation, it evolves along with the teenage culture and always has a concrete relationship with pop culture.

Making fun of someone or something light-heartedly

General word for any item / slang term for ecstacy

A term for embarrassment

Someone or something that is grossly dramatic, or trashy

Someone pretending to be someone they're not using an online profile

Using social media to look at someone, or seee photos of them

A common term of endearment for a girl/boyfriend

A picture taken of yourself, usually several until the perfect one

Common instagram/twitter "tag" to mark your post, the use of saying "hashtag" before a phrase has become a sarcastic joke to imitate social media posts

A creative way to do a simple task

You Only Live Once

An exclamation of success

Using the annonymity of the internet to annoy/harrass people

A short-lived video app, where videos were limited to 7 seconds

A Hashtag accompanied by an old photo of the poster

Teenagers love using smiley faces! However, they do have they're own meanings attached and even this can change depending on the context.

Scared to say what
they've done

Used for an
ironic smile.

Emoji version of
'whatever'

Used when under
pressure

Used when making
a light joke

Used for lots of
laughter

Used when annoyed
at someone

Used when feeling
smug or flirty


We hope that this brief glossary of teenage terms has helped you in some way. If you have heard your teen using any new words or phrases that we may have missed, feel free to comment below and help out your fellow 'rents! Don't forget to check out our other resources to help you through the techy teenage years.