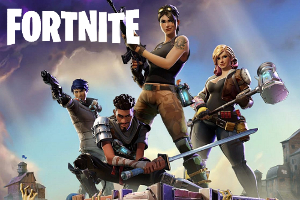 Fortnite is a free-to-play online video game, where players take part in a Hunger-Games style tournament. Each match starts with 100 people, who then battle it out on a large island to be the last person standing. Each match that can last anywhere between 15 and 30 minutes, with roughly 3 million people playing in different matches at any given time*. The game uses a combination of competitive gameplay and creative animation styles to stay fresh and fun for the players.

How does it work? 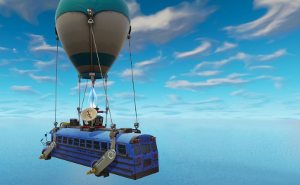 Players start in a flying schoolbus, which flies over the island. They can choose to jump out over the next minute or so, as the bus travels from one side of the island to the other. The timing of their jump dictates where they will be able to land on the island. After jumping, they skydive to their desired location, where they must scavenge for weapons, materials and armour to put up a fight against their opponents.

They can chop down trees or demolish house walls for materials, which can in turn be used to build complex structures, either for cover or for mobility,

Players must try to eliminate their opponents, and stay alive themselves, as the area they are able to play in shrinks, forcing players closer together and speeding up the process of finding enemies. To shrink their play area, a large blue dome, called the storm, closes in on a certain area of the map, which is different every time. If players spend too long outside in the storm, their health decreases until they die. In order to win, players must outlast all 99 other players, by hiding, building extravagant forts and actively battling it out in gun fights.

While the game itself only has a "12 years and up" rating from PEGI , this is solely in reference to the content of the game. The rating does not take into account the dangers your child can be exposed to if they participate in voice chat in a multiplayer match. If you are worried about your child speaking on the internet to strangers, the game allows for the voice chat to be disabled in the settings menu. There is a written tutorial available here, and a video tutorial available here.

Is it suitable for my child?

Fortnite is an interesting game with regard to suitability for children. There is competitive violence, as the aim of the game is to kill all other players, but the game does not take itself particularly seriously, with no blood or gore beyond your character falling over when killed. There are some cartoonish and goofy elements to the game, like a grenade that forces those close to it to dance for several seconds instead of exploding. As always, the question of suitability lies with parents and what their impression of the game is. To help you with your decision, click here for a good example of the average game of Fortnite, and any unsuitable content that a player might find.

What to watch out for? 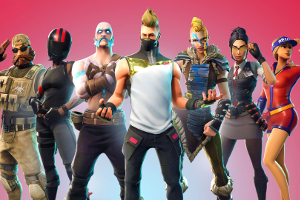 Playing Fortnite is free, which may leave you wondering how the company who created and run the game make any money. While you do not need to spend any money at all to experience the game to its fullest extent, EPIC Games, the company behind the game itself, offer players the option of spending money on cosmetic items that customise the player and the equipment they use. These cosmetic items are known as "skins", as they do not affect anything within the game, except for how a character looks.

Selling these skins, EPIC Games made $318 Million in the month of May, 2018. Children have been known to use their parents credit cards to pay for these "micro-transactions", or to continue using the same card after being allowed to use it once. Parents are advised to keep an eye on their children and any possible use of their credit cards in the game. As with all video games, moderation is key to a positive experience. Some parents have expressed concern that Fortnite is more addictive than other games and warn that caution should be expressed when considering how long to allow children to play the game, if at all. Please find below a couple of useful articles that may be of interest to any parents facing this decision.

Should Parents worry that their kids are playing Fortnite: Battle Royale?

We banned fornite in our house, but now our son is lonely!