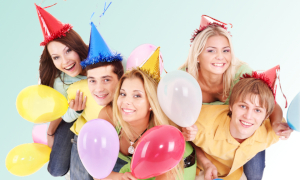 It can be difficult to plan teenage birthday partys at home if the teens aren't into dance/music. As teens grow and mature, it can be hard to figure out what will keep them occupied. Sometimes, especially later in their teens, they might be satisfied just to have fun hanging out with their friends, without any party games. For all the other times, the games below are for teens and can be great fun at a party. 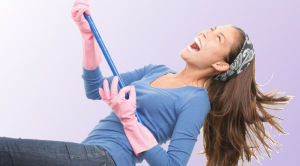 Silly scenes acted out by participants who have no idea what they are acting out.
Four people are chosen for the round and three of the four are taken out of the room. The one that remains is told to mime one of the following (or one of your own ideas) in approximately 20 seconds:

1. Changing the diapers of twins
2. Bathing an elephant
3. Jumping from a large tower into a huge bowl of Jello

Guess someone’s identity by feeling them with wooden spoons.
One of the guests is blindfolded, and sits upon a chair. He or she is then given two large wooden spoons, such as in common use in every kitchen for stirring puddings, cakes, and so on. One after another, the other boys and girls come up to the blindfolded sitter and stand or kneel before him/her, and he/she has to guess who each one is by simply feeling him or her with the wooden spoons. The task is very much more difficult than it looks and is great fun as the spoons go over the face and body in an attempt of the blindfolded person to discover the identity of the other.

Of course, any outburst of laughter when the spoons are going over a face would disclose the identity, so participants must keep perfect silence. When anyone's identity is guessed, he/she has to be blindfolded and must take the spoons. Be careful when using the spoons to touch another person with them quite lightly, so as not to hurt anyone. Any player who wears glasses should remove them 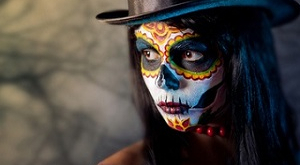 A game where killing is done with the wink of an eye.

Cut a small piece of paper for each player. Mark one of the sheets of paper with an "X," fold, shuffle, and distribute one to each player. Each secretly looks at his paper. The one who has the "X" is the assassin. Players sit in a circle and careful examine the faces of the other players. When the assassin winks at a player, the player must say, "I've been hit" and drops out of the game.

A relay race with balloons between people
Divide into two teams of at least five or more players. Choose a starting line and finish line at least 20 feet apart or more. Each person on each team is given a balloon (9 inch diameter or more). All players inflate their balloon and place it against the back of the team member standing in front of them. They press their bellys against the balloon to hold it against the back side of the next team member. Now you have a line of team members all holding their balloons firmly against the backs of the person in front of them. The front person will not be able to press their body against anyone since they are first. After both teams are in place at the starting line, instruct them that collectively, they are to move from the start line to the finish line. 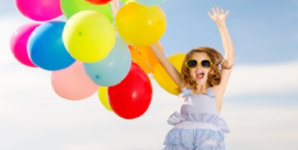